Luck is a portion of most games just as it is in the real world. Part of navigating life is doing so with limited information. Luck serves as this limited information which helps to make decisions trickier than they would be with a set of only guaranteed facts. Not only do you have to account for the pros and cons of what you intend on happening, but also the chance that absolutely everything will go awry, and you don’t necessarily have control over that. Though there is an issue with pure luck, as we don’t want the players to just be mindlessly throwing dice at a board or else that’s not really a game anymore but instead just an strangely accurate allegory for my entire quarantine experience. There is a balance that needs to be achieved, as you need to have variance such that the game does not just become an algorithmic puzzle like chess, but also doesn’t turn into Candyland. You have to be incredibly careful to how you suit this balance though, as when luck sways in a players favour, they’re going to be fine with it, but there is always another player on the receiving end of that equation who now feels cheated out of their victory.

Most of this problem actually is rooted in human psychology. Humans are rather pessimistic creatures as it comes to the way in which we weigh our experience. It is generally accepted that a human will weigh the malice of a negative experience such as losing in a game about twice as impactful as their wins. This is how a lot of people end up getting tilted and frustrated while playing games, simply put: losing sucks. However when these losses are due to our skill having been bested by others, there is some sense of relief in that. We can improve and try again from that, but when we feel that we did everything right that we could, and yet due to the flip of a coin we lost: that is when people begin to feel angry. Despite this we often have this idea that “balance” means that there should be a 50% win rate for any individual side, and while this is reasonable it also might highlight a fundamental issue with how we’re thinking about game experiences especially with how we implement random chance. Given skill and all the other strategic decisions players make during the course of a game, if we always have a roughly 50% chance of victory or loss is that right? That’s never going to be the case realistically, and we should build around that assumption.

Card games are an interesting little break off from this. During the little free time I have had more recently, I decided to take a trip down nostalgia lane and pick up yu-gi-oh duel links. Note that I have several issues with the fundamental way yu-gi-oh functions, especially duel links, but I just thought it would be a fun distraction that’s easier to pick up and put down when I’m busy. Your agency in these games is very different from what is typical. 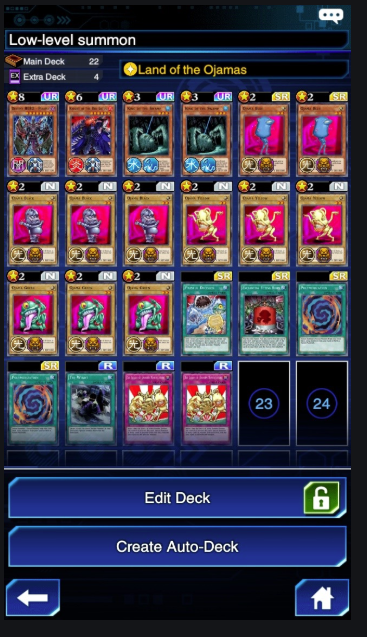 Instead of probability being something ubiquitous like a die roll, it comes from your assembly of a deck of cards all with their own abilities and synergies. The idea behind this being that you can make a deck that beats the odds of probability by doing things like tripling up on cards and only including useful cards. The deck shown above is an Ojama deck which I’m working to build something similar to, for now however I decided to try out the vampire archetype of cards which seemed fun. It’s been a very pleasant experience thus far. Building up combos for decks and watching it all play out according to plan is simply amazing. However there’s a flip side of that which I think is actually fairly well handled by the game. There’s always the chance with the deck above that you’re going to get a completely garbage starting hand and simply not be able to do anything about that. For all you know the top 9 cards of your deck could all just be Ojama Yellow/Green/Black and you’ll just get destroyed within a turn or two by your enemy who drew their win condition. This is why the meta decks are usually based around all having cards which help to draw and also interact with the cards in their deck, like my Vampire familiar which I can use to draw any spell I’d like from my deck under special circumstances. Though there are also the character skills duel links has implemented, which can compliment decks like that shown above by starting the duel with certain cards in your hand or played onto the field without any need for intervention by you as a player. These are the types of things which can help balance out a game even when it’s entirely founded upon the concept of drawing cards to be quite skillful.

One thought on “The Probability Problem”