Sometimes along the track of design you have an idea you’re iterating upon, which seems promising. Sometimes you put a decent bit of time into that idea, but not always do those ideas work out in the end. It’s important though to remember what you learned from that idea as you jump forward towards a new one. This happened early in our design for our game. We intend upon now making a space based hidden role game, pitch coming soon. To begin with however we had a different plan we were pursuing. Early on in my stream of debate I detailed the first idea we sought to go with. It was meant to be a tower scaling game in which the antagonists got fed up with D&D styled heroes taking all their money and decided to flip the script by storming their keep instead. However as we prototyped and playtested what we wanted to make the game into on a basic scale, we realized a fatal flaw in the games premise. While we liked the idea of it, and the flavour, and we even managed to get a clear visualization of what the gameplay would look like it had this one flaw. It was boring.

Not in the sense that we had simply imbalanced certain things or made yada yada too strong or too weak such that the gameplay became monotonous or frustrating. It was in a decent spot, but it was just incredibly unfun as the gameplay was rather repetitive and in itself just was a boring combat slog. The ways that we attempted to alter it also were rather counter-intuitive. Because of the very way we wanted the game to work in simply scaling the tower with random encounters, whenever we tried to introduce rules to break up the monotony, it instead often ended up adding confusion and general rules bloat that would make it more unappealing to newer players. Part of the issue we began to realize is that something like this is really better suited to an actual TTRPG system rather than what turned into a cardboard cutout of one. It wasn’t something that needed a bandaid fix, but rather a complete overhaul. Another large issue being this abomination found in the picture below, the hex grid, and the bane its existence placed on portions of our ideas given the way it tunneled a lot of our thinking. 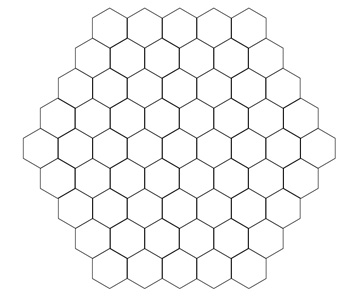 Sometimes however, you must realize when an idea is better to be shelved entirely in order to perhaps one day be revisited rather than to pitifully struggle to maintain what you made while simultaneously attempting to slash and burn the greater majority of it. Particularly when while working on that same advent your team has already come up with other ideas they simply hold more passion for and have a greater drive to pursue. That’s why we’ve chosen to take a different direction and move towards something else. Especially in times like this you just have to understand that not every single idea is going to end up being the one you settle on, and that’s OK.