Hi again blog fans.  For this week’s update, I’ll start with my prototype progress.  The big goal for this week was to get physical cards made so that I could attempt a first play test, but before getting there I realized I needed to know both how many cards I wanted total and how many of each type, and that’s where I ran into some initial trouble.

The original plan was to have the finishing conditions be that any player has constructed a total of 9 rooms, and from there I started to do the math.  Based on the rooms I’ve designed and how many of them there are, I wanted an in-play combination that would give plenty of rooms available for building so that every person in the game would have the opportunity to build those 9 rooms.  This process was great and fun for just 2 players, but when throwing in 3 or 4, I realized I was in trouble. Back to square ~2 (not all the way back to square 1, this problem wasn’t THAT bad).

At first, the plan was to specify to the players which cards should be utilized for a specific number of players, and I’ve played many games that have this mechanic, but it sucks.  Everyone hates searching for specific cards to pull out, including me, so I tried to work around it. From here, I realized what I should’ve realized right at the beginning – that my game-ending conditions need to change based on the number of players. With this in mind, I went back to change the end conditions, and based on these new parameters, reworked the cards and the math.

During this process, I ended up realizing a lot of things.  The most important one, though, was that no matter what decisions I made on available cards, I knew I would never be able to gauge if it was truly the right decision until I play-tested.  I did end up making some somewhat final decisions though, and here are some of them: 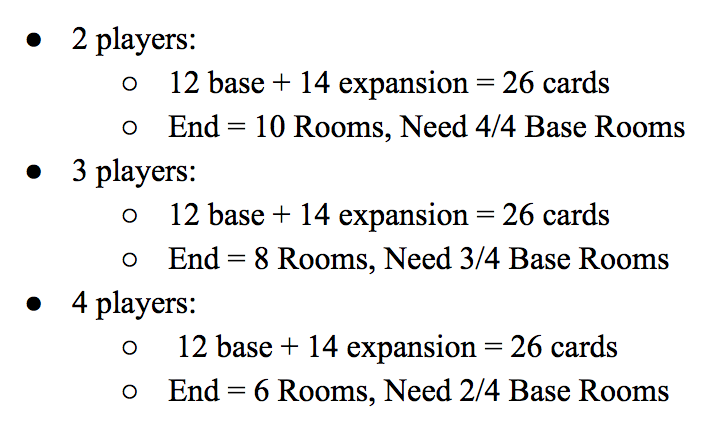 Next on the list, then, will be creating 3 new rooms (I now want 14 specific rooms, and I only have 11) and then changing the individualized objectives to reflect the new rooms present.  Though there will be new rooms, I want to keep the competition alive and have some of the same rooms earn extra points on multiple people’s objectives. But that’s all for now!

Latest posts by madelyn (see all)

One thought on “Card Logistics”